Mayor Eric Adams is picking the brains of his past two predecessors on how to govern America’s largest city.

“My relationship with [them] should send a signal to leaders throughout the country that even when we have differences of opinion, we can learn from those who have gone before us,” he recently said.

Adams added, he’ll “reach out to both of them, along with a broad cross-section of leaders inside and outside government, whenever I am looking for advice or guidance on an issue.”

At a time when the city is in the midst of the COVID-19 pandemic, rising crime and other crises, Adams repeatedly sought advice directly from Bloomberg and de Blasio in the weeks leading up to him taking office Jan. 1 and has continued since, multiple sources said.

Adams’ 750-person transition team is also relying on a half dozen former aides of both ex-mayors to help get him prepare for running the Big Apple, and sources said de Blasio administration officials provided Team Adams with detailed written briefs outlining city operations.

It’s a far cry from de Blasio’s icy relationship with Bloomberg, the billionaire he replaced as mayor in 2014. Both men barely talked throughout the entire transition period, sources said.

The relationship especially soured after guest speakers at de Blasio’s inauguration harshly criticized the Bloomberg administration while the departing mayor was sitting in the audience — including a government worker calling the city a “plantation.” A day later, the progressive de Blasio doubled down on the divisiveness, telling reporters, “I am very comfortable with everyone’s remarks.”

Howard Wolfson, a close advisor to Bloomberg and a former deputy mayor, recalled agency commissioners under Bloomberg preparing a “detailed briefing book” to help guide the de Blasio administration that collectively totaled thousands of pages. He now wonders if the effort might have been a waste of dead trees. 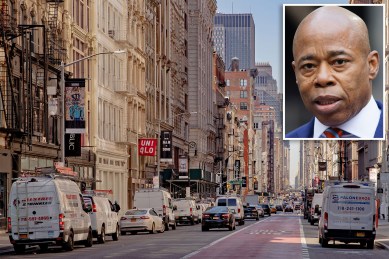 Adams leaning on Bloomberg, de Blasio for advice during transition

What Eric Adams’s Hires Say About Him: Loyalty Comes First