By Ashley Hume For Dailymail.Com

On Tuesday, Sony released the latest teaser for Morbius, which stars the 49-year-old actor as a doctor who unwittingly infects himself with vampirism in a desperate bid to cure himself of a fatal blood disease.

Though the film is set in the Sony Spider-verse, the trailer hinted at a crossover with the Marvel Cinematic Universe as Michael Keaton's the Vulture made a surprise appearance in the new trailer. 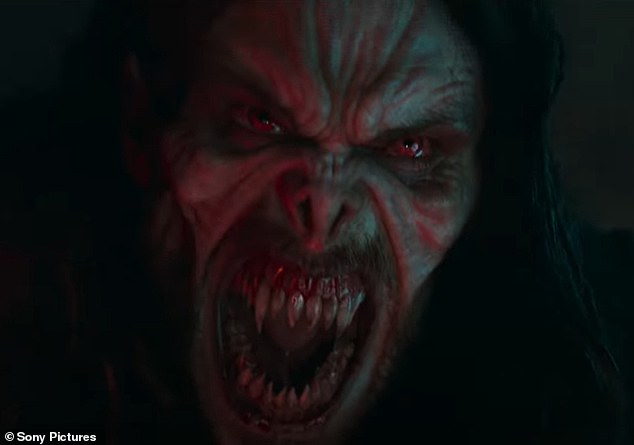 Originally slated for release in July 2020, the movie was delayed several times due to the COVID-19 pandemic but it is now scheduled to debut in theaters on January 28th, 2022.

The latest trailer for Morbius is the first look at the film in almost two years. The last trailer was released in January 2020.

Origin story: On Tuesday, Sony released the latest teaser for Morbius, which stars the 49-year-old actor as a doctor who unwittingly infects himself with vampirism in a desperate bid to cure himself of a fatal blood disease

Transformation: Morbius is initially shown as frail and has to walk with the assistance of a cane

The official synopsis reads: 'One of Marvel’s most compelling and conflicted characters comes to the big screen as Oscar winner Jared Leto transforms into the enigmatic antihero Michael Morbius.'

'Dangerously ill with a rare blood disorder and determined to save others suffering his same fate, Dr. Morbius attempts a desperate gamble. While at first it seems to be a radical success, a darkness inside him is unleashed. Will good override evil – or will Morbius succumb to his mysterious new urges?'

As the trailer, Dr. Michael Morbius is shown flying by helicopter into the mountains.

A frail-looking Morbius walks out of the helicopter with the assistance of a cane. 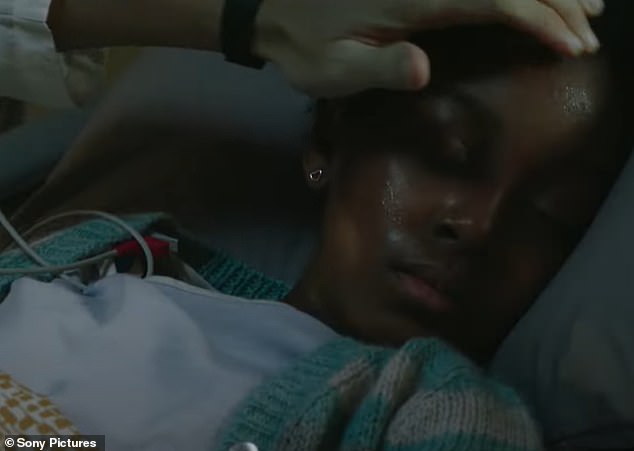 Caring: Morbius is shown caring for a patient who also has the fatal blood disease

In a voiceover, Morbius says, 'I should have died years ago,' as he is shown receiving medical treatments.

While Morbius treats a young patient who was lying in a hospital bed, the voiceover continues, 'People all over the world have my disease.  Morbius' fiancee Martine Bancroft (Arjona) looks on with admiration.

In the voiceover, Morbius continues, 'I'm here to find a cure.'

As he is shown arriving in the mountains, Morbius says, ''We have to push the boundaries, take the risks.'

He slashes his palm and holds it to a wooden frame strung with wires. Moribus says, 'If you are going to run, do it now.'

Determined: Morbius is dedicated to finding a cure for his disease

Desperation: In his search for a cure, he turns to dangerous experimental treatments

The scene cuts to an explosion of bats flying out of a cave and surrounding Morbius who screams.

He continues, 'Then you were found in a container ship that washed up off Long Island.'

A team of soldiers is shown infiltrating the ship until one is dragged away.

The scene cuts to Morbius as he speaks with Stroud.

'What did you do to yourself, doctor?' asks Stroud.

'I wish I knew,' Morbius replies.

Discovery: Morbius is found after two months on a container ship

He continues in a voiceover, 'I went from dying to being more alive than ever.'

Morbius is shown hooked up to medical equipment before the scenes cuts to a shot of him looking healthy and strong.

Bancroft turns to him and says, 'It worked.'

He replies, 'Not exactly' as he is shown looking up with dilated pupils at a glass case filled with bats.

As he tests out his new powers, Morbius continues, 'I have increased strength and speed and some form of bat radar.'

'What else can I do?

Morbius appears in a closeup as his pupils dilate and then darken. He then flies through a subway.

Bancroft tells him, 'There are limits, there have to be.'

He says, 'There something inside of me,' as he is shown surrounded by bags of blood. Morbius transforms as his face becomes distorted and he bares his fangs

Morbius continues, 'He wants to hunt and consume blood.'

The scene cuts to Morbius sitting in a park with his mentor (Harris) who asks him, 'Can you control it?'

'Half the city wants to kill you,' Stroud voices over a crime scene covered with yellow tape.

Worried: Morbius' fiancee Martine Bancroft (Arjona) is concerned about him

In a reference to the Spider-man universe, a closeup of a copy of The Daily Bugle is shown with a headline that reads 'Dr. Michael Morbius Apprehended for "Vampire Murder."

Two FBI agents are seen investigating as one says, in a call back to Venom: Let There Be Carnage, 'We haven't had anything this good since that thing in San Francisco.'

Stroud continues,'The other half wants to control you.'

Clad in a prison uniform, Morbius walks by a wall of graffiti that reads: 'Murder.' 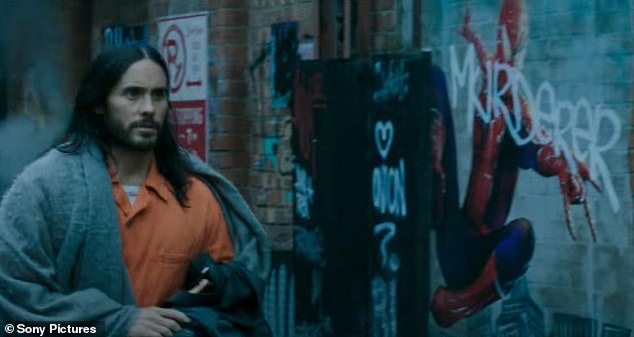 Callback: In a reference to the Spider-verse, Morbius walks by graffiti that read 'Murderer' over Spider-Man artwork

Keaton as Adrian Toomes also known as The Vulture makes his appearance as Morbius gets into a police van.

Tomes says, 'Hey Dr. Mike, 'You and I should stay in touch.'

Over fight scenes, Morbius says, 'I'd do anything to save a life.'

'But i don't know what i'm capable of,' he continues as claws extend from his fingers.

'You save lives you don't take them,' Stroud insists.

Harris says, 'Are you here to heal the world or to destroy it?' 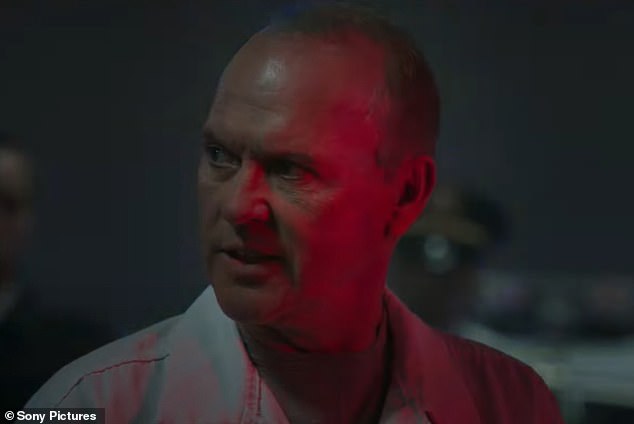 Surprise! Michael Keaton appears in the trailer as The Vulture indicating a crossover with the MCU

Fighting the urge: Morbius struggles to control his violent urges 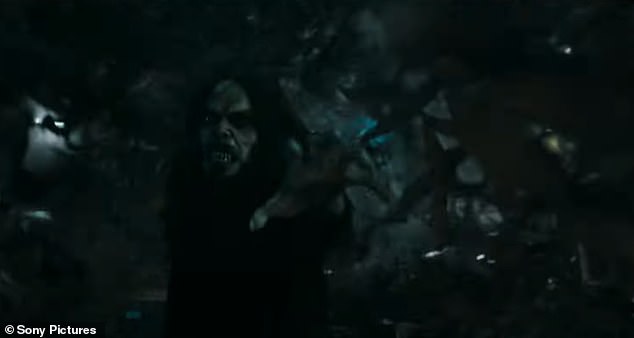 Dangerous: Morbius is shown surrounded by bats as his face twists into a grotesque mask

Morbius is shown surrounded by bats as his face twists into a grotesque mask.

As Morbius grabs FBI agent Alberto Rodriguez (Madrigal) by the throat, Rodriguez asks, 'Who the hell are you, man?'

'I am Venom,' Morbius tells him and flashes his fangs.

He then transforms back into his human form before saying, 'I'm just kidding, it's Dr. Michael Morbius at your service.' 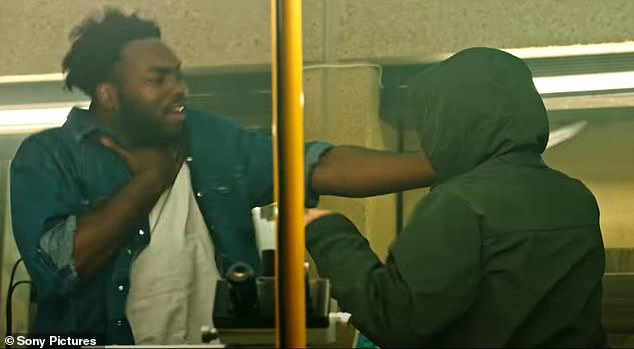 Confrontation: As Morbius grabs FBI agent Alberto Rodriguez (Madrigal) by the throat, Rodriguez asks, 'Who the hell are you, man?' 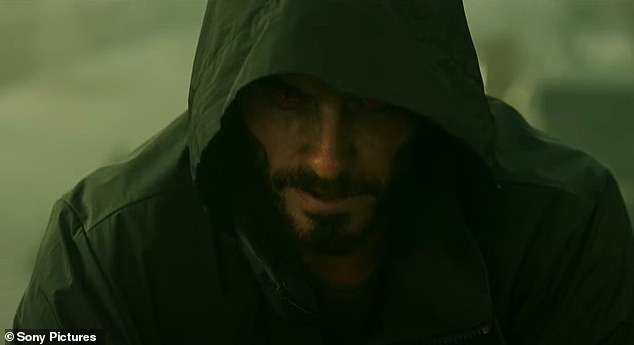 Name-drop: Morbius name-drops Venom in another reference to the multi-verse